The Gennett Records page is run by Charlie Dahan and is dedicated to sharing the music, history, photos and artifacts from the Starr Piano & Gennett Record company.

In 2016, I co-authored the book Images of America: Gennett Records and Starr Piano with Linda Gennett Irmscher. The book tells the entire story of the two companies from founding through the efforts to preserve its history using over 200 photos, many of which have never been seen before! 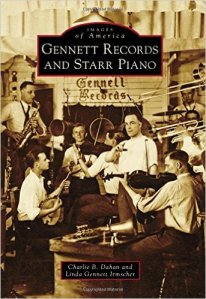 About Charlie Dahan
I am a Professor in the Recording Industry department at Middle Tennessee State University. I am co-authoring a complete Gennett Record discography with T. Maloolm Rockwell. I serve on the National Board of Advisors to the Starr Gennett Foundation. One of our prime missions is to provide scholarship in relation to the Foundations choice for the Walk of Fame Induction each year. I teach courses on the music industry and social media marketing (“Cyber PR“)

About Gennett Records (from Wikipedia)
Gennett records was founded in Richmond, Indiana by the Starr Piano Company, and released its first records in October 1917. The company took its name from its top managers: Harry, Fred and Clarence Gennett.[1] Earlier, the company had produced recordings under the Starr Records label. The early issues were vertically cut in the gramophone record grooves, using the hill-and-dale method of a U-shaped groove and sapphire ball stylus, but they switched to the more popular lateral cut method in April 1919.

Gennett set up recording studios in New York City and later, in 1921, set up a second studio on the grounds of the piano factory in Richmond, Indiana under the supervision of Ezra C.A. Wickemeyer. The sides recorded in New York are generally of about typical audio fidelity for a minor label of the time, and some masters were leased from other New York area firms. The sides recorded in Richmond are decidedly below average in audio fidelity, and sometimes have a crude sound and show problems of inconsistent speed of the turntable while the master was being recorded, problems which the major labels had solved some 20 years earlier.[citation needed]
1925 Gennett 78, 5654-B, “Davenport Blues”.

Gennett issued a few early electrically recorded masters recorded in the Autograph studios of Chicago in 1925. These recordings were exceptionally crude, and like many other Autograph issues are easily mistaken for acoustic masters by the casual listener. Gennett began serious electrical recording in March 1926, using a process licensed from General Electric. This process was found by to be unsatisfactory, for although the quality of the recordings taken by the General Electric process was quite good, there were many customer complaints about the wear characteristics of the electric process records. The composition of the Gennett biscuit (record material) was of insufficient hardness to withstand the increased wear that resulted when the new recordings with their greatly increased frequency range were played on obsolete phonographs with mica diaphragm reproducers. The company discontinued recording by this process in August 1926, and did not return to electric recording until February 1927, after signing a new agreement to license the RCA Photophone recording process. At this time the company also introduced an improved record biscuit which was adequate to the demands imposed by the electric recording process. The improved records were identified by a newly designed black label touting the “New Electrobeam” process.

From 1925 to 1934, Gennett released recordings by hundreds of “old-time music” artists, precursors to country music, including such artists as Doc Roberts and Gene Autry. By the late 1920s, Gennett was pressing records for more than 25 labels worldwide, including budget disks for Sears, Roebuck’s catalog. In 1926, Fred Gennett created Champion Records as a budget label for tunes previously released on Gennett.[3]

The Gennett Company was hit severely by the Great Depression in 1930, and massively cut back on record recording and production until it was halted altogether in 1934. At this time the only product Gennett Records produced under its own name was a series of recorded sound effects for use by radio stations. In 1935 the Starr Piano Company sold some Gennett masters, and the Gennett and Champion trademarks to Decca Records. Jack Kapp of Decca was primarily interested in some jazz, blues and old time music items in the Gennett catalog which he thought would add depth to the selections offered by the newly organized Decca company. Kapp also attempted to revive the Gennett and Champion labels between 1935 and 1937 as specialists in bargain pressings of race and old-time music with but little success.

The Starr record plant soldiered on under the supervision of Harry Gennett through the remainder of the decade by offering contract pressing services. For a time the Starr Piano Company was the principal manufacturer of Decca records, but much of this business dried up after Decca purchased its own pressing plant in 1938 (the Newaygo, Michigan plant that formerly had pressed Brunswick and Vocalion records). In the years remaining before World War II, Gennett did contract pressing for a number of New York-based jazz and folk music labels, including Joe Davis, Keynote and Asch.

With the coming of the Second World War, the War Production Board in March 1942 declared shellac a rationed commodity, limiting all record manufacturers to 70% of their 1939 shellac usage. Newly organized record labels were forced to purchase their shellac allocations from existing companies.[4] Joe Davis purchased the Gennett shellac allocation, some of which he used for his own labels, and some of which he sold to the newly organized Capitol Records. Harry Gennett intended to use the funds from the sale of his shellac ration to modernize this pressing plant after Victory, but there is no indication that he did so, Gennett sold increasingly small numbers of special purpose records (mostly sound effects, skating rink, and church tower chimes) until 1947 or 1948, and the business then seemed to just fade away.

Brunswick Records acquired the old Gennett pressing plant for Decca. After Decca opened a new pressing plant in Pinckneyville, Illinois in 1956, the old Gennett plant in Richmond, Indiana was sold to Mercury Records in 1958.[5] Mercury operated the historic plant until 1969 when it moved to a nearby modern plant later operated by Cinram.[6] Located at 1600 Rich Road, Cinram closed the plant in 2009.[7]